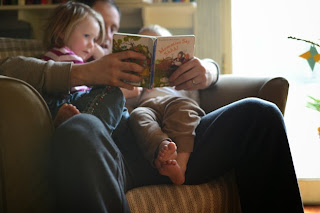 This is about books. It's also about parenting, teaching and a bunch of other things which will not be discussed, either primarily or at all.

I know when my love-affair with books began. I have vivid memories of my father OB'M coming home on a Friday afternoon, with his ubiquitous “lawyer bag” (that's what I called it) in hand. He would put it down in the foyer, and tell me to open it up, as there was something in the bag for me. Whenever this happened, I knew it meant one thing. My father, who loved to read, had stopped off at The Strand, one of his favorite used-bookstores. While there, he had not only picked out a bunch of crime detective novels, or books about some fascinating episode in US history, he had also picked out something for me. As a young child, it also meant that after the family finished Shabbos dinner that night, we would lay on the floor in the living room, as he read to me. The first book I remember him reading to me, was Roald Dahl's “Charlie and the Chocolate Factory”. There would be other books by Dahl, all of which I would love, a love I continue to feel, despite learning later on that he was a virulent anti-Semite. There were also many other authors and topics. As I got older, I'd read the book by myself, but I never stopped feeling like the excited young child, each time the Friday afternoon scene was repeated.

I recall, that when my sister applied to Yale (she was accepted), one of the essay questions was “Describe the last book you read”. I remember thinking that any student who chose that essay would almost certainly figure out the last book they should have read. I, somewhat pretentiously, decided, that from that moment on, I would only read books which I would be willing to write about on an essay like that (sports book were the one exception, although even there, I tend to favor serious writing). Since that time, I've done a pretty good job of sticking to that decision. I read mostly non-fiction, particularly memoirs, biographies and history, as well as the classics. I never developed a taste for crime novels, despite my father's love for them. More importantly, he never tried to push them on me. That's another one of his lessons that I failed to learn.

My wife and I love to read. We read to our children starting when they are young, and buy them books or take them to the library, whenever possible. All of our children who are old enough to read, are readers, with a few being serious bookworms. I take a lot of pleasure in watching them develop this love of reading. Still, the fact that they enjoy reading books which are fun rather than serious, has been a somewhat tough pill to swallow. As they've grown older, I've tried to push my snobbish, high-brow tastes on them, with little or no success. This past Friday night, this topic came up at the Shabbos table, and one of our guests said his father had done the same thing to him and his siblings, who are all older than my children, when they were young. He also pointed out, that not a single one of them developed a taste for the classics. When I heard those words, it was like a punch to the gut.

Whether we are teachers or parents (or, as in my case, both), our job is not to create clones of ourselves. Giving children wings and the ability to fly is one thing. Choosing the destination where they must go is entirely something else.