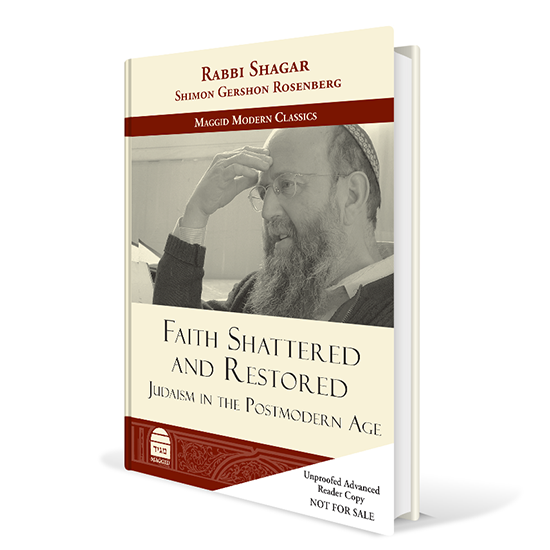 As I think of Rav Shagar zt”l, there’s an image which keeps coming to my mind. A searcher is climbing a mountain looking for the guru who will help him find truth. He finally reaches a plateau, and sitting right there is the one whom he thinks will answer all of his questions. The guru, who much prefers solitude, agrees to let the searcher stay, but only on one condition. The guru will continue his own personal search for truth, and the searcher can listen to it all, but he may not ask any questions. After all, the guru himself is still  searching.

With the recent release of “Faith Shattered and Restored”, which contains the first attempt to bring Rav Shagar to an English speaking audience, Maggid Books is attempting to bring Rav Shagar’s ideas to foreign soil. The question is whether a thinker who is very much a product of Israel can be understood by the Anglo reader. A number of excellent reviews have already been written. Levi Morrow, and Zach Truboff, have each written thought provoking reviews. Additionally, a fascinating conversation between the editor of the new volume, Dr. Zohar Maor, and its translator, Elie Leshem has recently been published. In a certain sense, one can ask what else can be said. Still, I’d like to approach things in a certain sense from where Morrow and Truboff left off, namely whether Maggid’s goal of bringing Rav Shagar’s ideas to an English speaking audience will bear fruit.

Before I begin, a few quick notes. I write this as the searcher who has found Rav Shagar. I am both privileged to be allowed to hear his thoughts, and sometimes confused by what I hear. Rav Shagar often seems to be megaleh tefach u’mechaseh tefachim, hiding more than he shares. For me, Rav Yair Dreyfus, who was a talmid chaver of sorts of Rav Shagar, and the one with whom he started his last yeshiva Siach Yitzhak, is the peirush Rashi through whom I make sense of Rav Shagar. Additionally, for those who decide to read this fascinating work, I would recommend that you make use of Rav Shalom Carmy’s afterward, while reading the book and not after, either by using his words as an introduction to each chapter, or as its summary. It is not that Leshem did not do a good job translating Rav Shagar’s words into English. On the contrary, he did a masterful job. Still, at least for me, even when one knows the meanings of the words, it is not always easy to grasp  Rav Shagar’s ideas. Finally, I will not attempt to summarize the specific essays in this book. Instead I will share more global thoughts which from having read this and a number of other of Rav Shagar’s works.

So with all of this, why should the thinking English reader try to make their way through Rav Shagar’s essays? It is not to find a systematic thinker. Consciously or not, Rav Shagar’s many essays written at various times  before his untimely death, pull in various directions. The fact that the essays in this book deal with postmodern ideas do not mean that he was a postmodernist. In fact, Rav Dreyfus suggests that he was more of an existentialist. What one does get from reading Rav Shagar is someone who bares his soul, or at least does so as much as he can. To me, it is not surprising that Rav Shagar’s two essay volume on Likutei Moharan of Rebbe Nachman reads so clearly. Like Rebbe Nachman, Rav Shagar struggles between simple faith, and the many ideas and experiences which make this pure faith so hard to maintain. I don’t say this lightly, but of all the thinkers who Rav Shagar quotes, he seems to be kindred spirits with  Rebbe Nachman.

To give one of the more important examples of what made him so complex, Rav Shagar fought in the Yom Kippur War. He was the driver of a tank, and was badly injured in an attack which killed the other two men who were with him in the tank. He called that war his generations Holocaust, words which are particularly filled with pathos in light of the fact that his parents were survivors. Already pushed towards a silent pessimism by his parents, surviving the attack while his friends did not, pushed him even deeper inside himself.

It is this complexity which I think can speak so deeply and directly to those who are searching. His questions are powerful and raw, and yet at the same time he struggles with them without losing his, I can use no other word, frumkeit. In this he pushes back on those who think that serious religious observance, and deep inner conflict cannot go hand in hand. Additionally, he eschews any attempt to make the various pulls that he experiences fit together. For him, there is no “Torah and” or “Torah im”. No attempt is made to synthesize the various parts of himself. He is willing to be who he is, without any sense that his conflicting sides must be solved.


Finally, I would add that he pushes the reader to look deep within him or herself to try and be their own hero, rather than looking to him as a savior who will make that which cannot be perfectly joined be put together. This can be seen from the fact that he has become much more popular (in both senses of the term) in death, than he was when he was alive. In a sense, for his readers he is not the chassidic rebbe to whom one flocks to receive answers. Instead, through his words, his questions and struggles, one learns how to look deep inside themselves.
Posted by Pesach Sommer at 12:08 PM No comments: