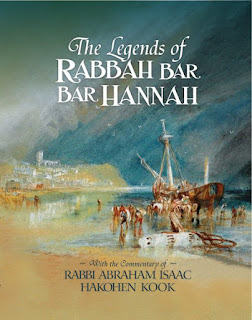 With the book launch for Rav Bezalel Naor’s “The Legends of Rabbah Bar Bar Hannah” based on Rav Kook’s commentary, coming up on December 10th in Teaneck, this is an opportune time to share my thoughts on Rav Naor’s latest masterpiece. (Click here to view the Facebook event page)

This is not my first review of one of Rav Naor’s sefarim. Most recently, I reviewed his Rav Kook siddur. I’ve been blessed to not only learn from Rav Naor’s writings, but also from him in person. It is no exaggeration to say that he is like no teacher of Torah I’ve met before. While he is perhaps known as one of the biggest experts on Rav Kook’s Torah, his encyclopedic knowledge covers much more than “only” Rav Kook. He has published dozens of books on all sorts of subjects, which cover all areas of Torah, both nigleh and nistar. Those of us who have merited to learn from him in person, are continuously amazed by his grasp of Shas, halacha, machashava and more.

Rav Noar’s latest work is no exception. The Rabbah Bar Bar Hannah stories, found in Bava Basra 73a-74a, are as wild as they are enigmatic. RBBH meets all sorts of interesting people and sees mythic creatures. While the uninformed reader may see these stories as “tall tales” or mythology, through the eyes of a talmid chacham, they contain great secrets. Famously, the Vilna Gaon wrote a commentary on these stories, which became well known through Rav Aharon Feldman’s The Juggler and the King. Through the GRA’s grasp of all of Torah, these stories are revealed to have the greatest depth. Long before he became the Chief Ashkenazi Rabbi of Palestine, while still living in Eastern Europe, where he served as a rav, a young Rav Kook also wrote a commentary on these gemaras.

Rav Naor’s new book contains the commentary in Hebrew, as well as in English with extensive endnotes, which k’darko b’kodesh, reveals Rav Naor’s encyclopedic knowledge, and fascinating analysis. Rav Naor shows how a young Rav Kook already possessed a thorough knowledge of nigleh and nistar, the latter of which he refers to directly, something which is different from Rav Kook’s later works. As if that wasn’t enough, there are 11 appendices included on fascinating topics including Rav Kook’s thoughts on mussar, Chabad chassidus, his connection to the Ramchal, and his understanding of what must happen for Moshiach to come.

While I loved nearly everything about this book, I was surprised by its cover, as well as the artwork which accomplishes each new section of aggadeta. Rav Naor’s name does not appear on the cover, and the title, referring to the aggdeta as “Legends”, as well as the artwork might well lead to someone thinking that this is a children’s book. Of course, it is anything but. It would be a shame if people judged this work by its cover. It is the latest in the incredible writings of Rav Naor, and as with all of his sefarim, it deserves to be studied by talmidei chachamim.


I am grateful to Alec Goldstein of Kodesh Press for making this work available to those who yearn for Rav Kook’s Torah.

Posted by Pesach Sommer at 8:51 AM