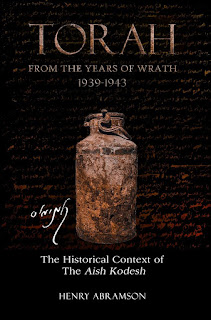 Without lifting up a gun or molotov cocktail, Rav Kalonymous Kalman Shapira, the Piaseczna Rebbe committed some of the greatest acts of heroism of World War II. While experiencing much personal trauma and suffering, the rebbe managed to offer words of encouragement and hope to unknown scores of Jews, religious and irreligious, chassidim and misnagedim alike, who, like him, were trapped in the Warsaw Ghetto. Those who have read the rebbe’s words of Torah delivered on many of the Shabboses and Yamim Tovim between the years 1939-1943, the written record of which miraculously survived after being buried in the ground before the ghetto was destroyed, have been inspired by his uplifting words delivered under the most trying of circumstances.Still, until recently, readers had an incomplete picture of his words.

After being discovered in the rubble of the Warsaw Ghetto, the rebbe’s derashos were published by some of his surviving students and chassidim in a work they titled Aish Kodesh. While they did their best to give over the rebbe’s words as accurately as possible, there were various typos and other errors that made it into the sefer. Recently, Dr. Daniel Reiser of Herzog Academic College and Tzefat Academic College published an incredible two-volume critical edition of the rebbe’s derashos which is destined to be the one used by anyone interested in learning the rebbe’s wartime Torah. The first volume includes fascinating biographical information about the rebbe, as well as a fully corrected version of each of the derashos. The second volume has a facsimile of the actual pages which were buried by Oneg Shabbos, as well as a transcription in multiple colors of the rebbe’s words. Still, one problem remained. In delivering his words of Torah, the rebbe consciously chose to almost entirely refrain from mentioning the name of those who were behind the terrible suffering which he and his listeners experienced. With almost no exceptions, one who reads the rebbe’s words from this time period could theoretically be unaware of the particular tragic time period in which it was written. While his divrei Torah provide comfort and hope to those who are suffering, the reader is largely  left unaware of the particular events which led the rebbe to say what he did  each week.

To fill this void, Dr. Henry Abramson, dean of Touro College in Brooklyn has written Torah From the Years of Wrath 1939-1943: The Historical Context of the Aish Kodesh. As with Reiser’s books, Dr. Abramson’s book promises to be groundbreaking for both scholars and laymen alike.

After an opening chapter which provides biographical  information about the rebbe from before the war, there are three chapters each of which concentrates on a year from the war, what the rebbe spoke about at that time, and which events led to the choice of topic. Through Abramson’s thorough scholarship and compelling writing, the reader’s eyes are opened as the divrei Torah are connected to the rumors which might have been going through the ghetto that week, a new policy which led to additional suffering, or the narrowing of the parameters of the Warsaw Ghetto. Just to cite an example, the rebbe chose to speak about the walls of a house getting tzaraas during the week where the Nazis built the walls of the Warsaw Ghetto. This is just one of the scores of examples that Abramson’s scholarship has uncovered.

In addition to providing the background information for many of the derashos, Dr. Abramson also provides other fascinating information about the rebbe’s time in the ghetto. One of the highlights of the book for me was reading about the rebbe’s pre-dawn visit to the mikveh on erev Yom Kippur. Meticulously planned, the rebbe’s efforts to immerse in the mikveh came at great risk, as the Nazis had closed all mikvaos and threatened to kill anyone who attempted to immerse. Even for those who can’t fully understand what going to the mikveh meant for the rebbe, the details of his visit with the help of others, as well as what happened when he reached the mikveh (page 139), will leave the reader speechless.

The book concludes with a fifth chapter where Dr. Abramson addresses something which has long been a point of contention among scholars. As one reads rebbe’s words from during the war, one notices a shift in his outlook. While at the beginning of the war the rebbe seemed to see the suffering that he and his fellow jews were experiencing  as fitting within traditional explanations for earlier tragic eras, where teshuva is required, it is clear that at a certain point he recognized that the level of suffering was way beyond that which could be explained by seeing it as a mere extension of earlier tragedies. The rebbe no longer suggested that those who were listening to him could change things by returning to God. Instead, he tried to figure out how a believer should view this sui generis experience. While unfortunately certain academic scholars have used this change to suggest that the rebbe (God forbid) lost his faith, Abramson shows the absurdity of such a claim (Rieser does this as well in the first volume of his work). He makes a conclusive case that while the rebbe struggled to make sense of the atrocities that the Jewish people were suffering, he remained what he had always been, a person with deep and enduring faith.


Dr. Abramson has written a book which is destined to lead to an increase of study of the rebbe’s Torah and thought in both the academic and Jewish world. His is a work which while maintaining high academic standards and containing ideas which will advance the field, is at once also accessible to the non-scholar, and written in an engaging and compelling manner. Especially for the reader who is looking for a work which contains both Torah and Avodas HaShem, along with serious scholarship, I can’t recommend this incredible book strongly enough.

Dr. Abramson will have a book launch for Torah From The Years of Wrath this Monday, October 30th at Touro College in Brooklyn. For more information, please click here.
Posted by Pesach Sommer at 9:48 AM